(Grr. Wrote long post, lost it. CBA to rewrite, so abbreviated version follows…)
Picture 1: mini cardigan in handspun red-and-pink two ply. Much nicer as two-ply than either of the plies as singles, although I bought more fibre because I’ll probably need to spin some more to finish.
Picture 2: Ralph’s tantalising socks, FO. Gorgeous pattern, interesting construction, yarn much better knitted up than I thought it would be. He likes them, too.
Pictures 3 and 4: the utterly fabulous whirlpool toe (pulled flat in picture 3). This is for the spiralling Coriolis from New Pathways, and the yarn is the red and pink sock yarn that Frax and I bought at the Knitting and Stitching Show to share, and which we finally split this weekend. It’s lovely yarn to knit with, much softer and less scratchy than the blue and purple (now mostly a clapotis) which I bought at the same no-name stall. Like the Opal in the tantalising socks, this is true variegated, with short stretches of colour that don’t stripe or pool, and I like it much more than most hand-painted yarn. I’ve been planning to use this for Coriolis ever since I first read the book, and I’m now neglecting the mini-cardi (which I’ve been knitting for less than a week) because I’m so eager to get to the increases

Skein of cerise singles
…Or I might ply it with this similar quantity of pink for scarily bright two ply.
That would be easier – no dyeing required. And would provide more yardage in finished yarn (about 200m).
So that might be the plan instead. 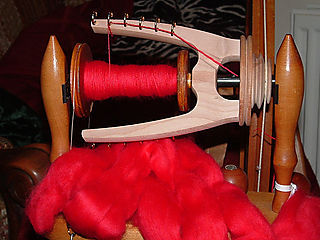 Cherry spinning
This bright red fibre was part of my planning-to-blend purchase from Texere. I don’t much like bright red on its own, but I bought two big bags of colours I do like (purple and burgundy), and lots of little bags of other colours, intending to hand card exciting heathery mixes. I still like the idea of blending, but I don’t enjoy hand carding enough to want to do it for large amounts, and I can’t justify the money or the space for a drum carder, so I’ve been working through the small bags (see also the ‘Silk cut’ and ‘Peacock’ yarns).
This one I started when I got back from holiday, as a stop-gap sort of spinning project. I need to buy more purple fibre to have enough of the slubby singles to make a cardigan, and I’m planning a dye-spin-knit-socks project with some undyed BFL, but neither of those are ready to go yet, and I was itching to spin (I missed my spinning wheel on holiday). So with no particular aim in mind, and happy to sacrifice the fibre to the spinning urge, I began to spin on my smallest whorl, as practice for the BFL (which I do care about, so will take care to get right). It’s not as even as I’d like, and I’m playing around a bit with drafting techniques, but while spinning just now (and listening to my first ever roughly-contemporary and in-order episode of Cast On, since I’ve just caught up with all the back episodes) I had an idea.
The plan is this: I will spin the lot as singles, then I will overdye it with darker red and possibly purple, to make variegated singles (with short, randomish colour variations so as not to accidentally produce stripy yarn; semi-solid is the aim). Then, depending on how much singles I produce, and how the dyeing turns out, I’ll ply it – two, three or navajo depending on which looks like it will work best. Thus will be born yarn that I will like out of fibre that I don’t. I hope 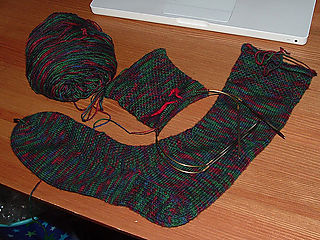 I’ve just got back from a week in Norfolk playing in a four-day roleplaying mini-campaign during which I occupied my hands (in between dice rolling) with knitting socks for the GM. If this was in the hope of receiving extra shinies, the hope was foiled so it’s probably best if I say it was merely for love of him* that I was knitting him socks

Technically, as you will see from the previous entry, I began the sock before leaving, but as this photo demonstrates, I also began the second sock before coming home again**, so it’s a whole sock from four*** days of roleplaying, not just most of one.

The sock looks a slightly peculiar shape laid out like that, but his GMliness assures me that it fits (somewhat to my disgruntlement – I had been faintly hoping it would be too small so I could keep them for myself). There are more pictures on Flickr and Ravelry, but some of them are too pale and the colours look all pastelly. And the gorgeous linen stitch texture just doesn’t photograph well at all, but the finished sock is very nice indeed. I’m pleased with the way the colours have arranged themselves – properly variegated, rather than the almost-stripes that variegated yarn more usually produces, and which I don’t like – and the pattern’s nice too. Still loving New Pathways. I’m intrigued, however, to notice that Bordhi uses the same heel in both directions. Which makes perfect sense – it’s just a right angle, and doesn’t much care which way it faces – but is surprising and new to me, and features the section I think of as the heel flap (although not in the usual top-down sense with the picked up stitches around the edges) sitting under the heel of the foot rather than behind it. This might not be clear in the photo, partly because the back of the heel is ribbed, which looks a bit like heel stitch in a picture.
Nice pattern, anyway. Nice yarn, nice sock. Now I just have to get on with the second one…
*OK, and/or for love of knitting socks.
**You’ll just have to take my word for it that I haven’t knit a stitch between getting home and taking this photo.
***Although I was only knitting on three of those days for various boring and annoying reasons. 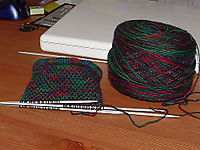 Ralph’s tantalising socks
I love linen stitch. I’ve never knit it before, but it’s gorgeous. Part of me is hoping these socks turn out to be too small for their intended recipient so I get to keep them for myself

The wisteria socks are finished. I’ve renamed them ‘dissertation socks’, because the spinning and the knitting of these has been very much bound up with the dissertation I’ve been writing since the beginning of the year, and because I finished them yesterday, on deadline day (having handed in two days earlier). I’m wearing them as I type, and am enjoying them greatly – I do really like the contrast between the two yarns (thicker three ply in the cuffs, thinner navajo ply in the main sock), and I don’t care that the stripe sequence somehow realigned itself during the heel.
And now I’m going on holiday for a week, and need to decide on holiday knitting to take with me. The purple cable cardigan is going, although I don’t know how much of it I’ll do – it’s a bit big for role-playing knitting (I henceforth coin an acronym: RPK). And Juno isn’t too big, but is too chart-following. I’m taking it, but I probably won’t knit it in-game.
The obvious solution is to start a new project! I am going to knit socks (Bartholomew’s tantalising socks, to be precise) for the GM, which might make him feel more kindly towards me knitting in session, and is bound to mean I get all kinds of GM favours. So I’ve told him, anyway

So three holiday projects – two largeish ones that I’ve already started but still have loads to go, and one new one which could itself easily occupy me for the week and is small and simple enough for RPK. Hooray for holidays!