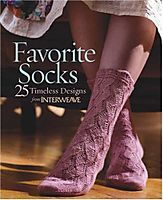 I like nearly all of the patterns, and am especiallyconsidering the colourwork ones, because I don’t like to wear patternsanywhere other than socks, so wouldn’t get the Fair Isle or intarsiaexperience otherwise (well, technically the red cardigan is intarsia,but only just). My favourite Favorite Socks:

So, Frax, are you still up for a knitalong, and are you interested in any of my favourites?

Earlier in the week, a tip off from brit_knitson LJ led me to a charity shop haul of 10 balls of slightly peculiartweedy wool/mohair in black and 11 of the same in a weird petrol blue,for not very much money at all. I’ve no real idea what I’m going to dowith them, and since they’re only 50g balls, it’s only enough to make ajumper if I use both colours, and I don’t think that’s going to work.This may have been a foolish buy, but I’m sure there are other things Icould make with it…

While contemplating what to make, I starting looking around Knitty, and was inspired by Danicato try entrelac, which I’ve wanted to do for ages, because it looksreally cool and fun to do. I was right, it is fun. I’m not intending tofinish this as it is – I don’t think it works that well with black, andI want to make something bigger than a scarf with this, but it’s set methinking that my next project might be one something like Lady Eleanor,the entrelac wrap. In variegated yarn, because I think it works reallywell in entrelac, and Bopeepsheep’s Lady Eleanor (in Rowan Tapestry) is gorgeous. 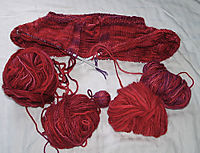 Meanwhile, I frogged and started again on the redcardigan, which I think you’ll agree is now much more cardigan-shaped(that’s the collar and the beginning of the shoulders in the picture).I’m not sure the colours show up very well in these photos – they’renot that bright in real life, although I’m slightly worried thatthey’re too bright for me.

Finally, I’m contemplating a little dyeing-and-felting project as alast-minute gift plan. I’ve got some plain cream wool (bought inNorthern Ireland on holiday last year) which will probably take dyenicely, and felt easily. I’ll say no more on the wildly unlikelyoffchance that the recipient reads this.

Cardigan neckline first attempt
I need to remember that the downside tomaking it up as I go along is the risk of getting it wrong and havingto frog. That’s what I’m about to do with the beginnings of the redcardigan. It’s a top-down all-in-one raglan, but I’ve messed up theincreases – forgetting to do two at each ‘seam’, and only doing one -so I’ll have to rip back to the collar and start again. And if I’mgoing that far, I might rip the whole thing back, because I alsosuspect the neck is too wide, the number of rows of seed stitchinsufficient, and the short rows at the back neck too many. Sigh. I like how the yarns are working together, though. Fyberspates’Scrumptious (roughly half-and-half silk and wool) is the seed stitchborder (balls 2 and 3 in the photo, counting from the left), and themain body of the cardigan is two rows of Manos (balls 1 and 4) to eachrow of Soho (ball 5) (because I’ve got twice as much Manos as Soho).Managing five balls at once is a bit of a pain, but the effect whenit’s knitted up is good – the Manos and the Soho are blending nicely.

So, today I unravelled the red-mix Manos delUruguay that I bought – and turned into a shawl-thing – in the US acouple of years ago. It was lovely, but I never wore it, and it wasn’treally doing justice to the yarn, so now I have 620g of ‘new’ yarn,without having to spend any money at all!

I’d mentally grouped the Manos with the Soho in my stash and theFyberspates left over from the Clapotis, because they’re all similarkinds of red mix, and I was considering an interpretation of theabstract cardigan from Alterknits, but looking at them together,they’re not different enough for it – would just look odd. 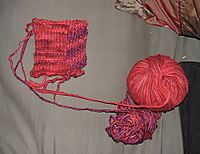 But now, I’ve swatched two-row stripes of theSoho and the Manos, with a seven-stitch seed stitch border in theFyberspates, and I love it. A new cardigan is born! (In my head atleast.) I’ll probably cast on for this more-or-less straight away,because although the purple cable cardigan is still on the go from aplanning point of view, it needs a lot more calculation and design, soit’s not ready to go yet. And I’ve just knit something with cables, and- would you believe? – I’m bored of them 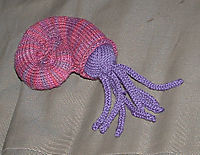 I love this pattern. It’s so cool, and so simpleand so interesting, all at the same time. I love the icord tentacles,and I love the spiral method.

Just back from a week in Cornwall, and I didphotograph the triskell cable socks, or rather, asked R to. This is theview from our front door, and I know it didn’t come out in the photo,but some of the blue in the background is sea as well as sky. (Sorrythe socks themselves are so dark – the photo was taken from insidefacing out, so the lighting’s funny.)

I’ve had a couple of requests on Ravelry for the pattern for these, soI’ll try and get round to finishing writing it up and post it.

I took Wisp with me, but didn’t even touch it – bored already! My otherholiday knitting plan was much more open-ended: my sock yarn stash andpatterns for socks and for toys…

St Austell, our local town, had a wool shop. Just a little one, andmostly containing either boring crappy acrylic-mix or stuff like DebbieBliss that I’ve seen in the flesh before and can get easily online. I’dgone in for some stuffing for toys, which they had, and they also had avery small amount of sock yarn. Nothing I can’t get easily online, no,but things I hadn’t seen in the flesh before… In recovery from theexpense of the Lorna’s Laces you see above, I bought one skein ofTrekking XXL in tweedy blues, and one skein of Opal handpaint in darkgreens, reds, purples and blues (I nearly got the other Opal colourwayas well: flame-coloured reds, yellows and oranges). But I’m not allowedto cast on with them until the Favourite Socks book arrives (althoughthat leaves me with no current project that isn’t stalled or not yetready to go OTN).

So, stuffing for toys. Did that tell you what I knitted on holiday? Ilike making toys from sock leftovers – I once made a dinosaur for Jfrom leftover Curious Yarns sock yarn. In Cornwall I made Nautie fromleftover Lorna’s Laces Valentine and purple Cherry Tree Hill, andstarted Norberta from leftover LL Rainbow and a no-name dark green. Ilove Nautie – so much fun to knit, and looks really cool, but I’m notsure about Norberta; I think my gauge is off, because she’s not asrounded as she should be – more sleek than chubby – and her spine wasway too long. The spine is cool, though – looks like a Pride rainbow:-) And I don’t like the garter stitch. So I might not bother finishingher. Photos of both Nautie and half-Norberta to come.

The triskell cable socks are now finished, bar the trivial matter ofweaving in the ends (NB, must also weave in ends on Baudelaire). Nophotos yet, because I’ve spent the evening preparing for going toCornwall on Saturday (might photograph socks in glamourous Cornishlocation). I’ve also been downloading patterns to take with me, sinceI’ve inconveniently finished a project just before going and amunlikely to get round to starting another in time (am bored of Wisp, sodon’t want to take it). Seems I’m incapable of writing a sentencewithout a parenthetical comment (even this one).

The patterns I’ve downloaded are all intended for sock yarn (wide-ishchoice available, takes little space, few sets of needles required).Some of them are actually sock patterns (for socks for friend-R -probably Jaywalker, but I’ve downloaded some others as well in case Ican’t get a decent gauge on Jaywalker), and the rest are toys(dinosaurs, nautiluses (nautili?), dragon, turtle, etc), cos I don’twant to buy yarn for toys, but they work well knit small from sockleftovers).