… I’ve also spun batches two and three of the red leaf fibre (wildly varying weights because I changed my mind about how fine I wanted it to be after batch one, but never mind), and begun Henry for large-male-friend-R: I’ve completed the cast on plus two rows! Since each row is approximately five million and six stitches, this is quite a lot of work. I know I’ve only just started the push-me-pull-you socks, but I thought I could do with a larger-needle project as well, to save my hands. No photos yet, for either the spinning or the knitting (in Henry’s case, because all that’s visible at the moment is the waste-yarn cast on, which is Lorna’s Laces rainbow (my go-to waste yarn for most purposes, since I’ve got a fair amount of it left hanging around), so a picture wouldn’t be very informative anyway). 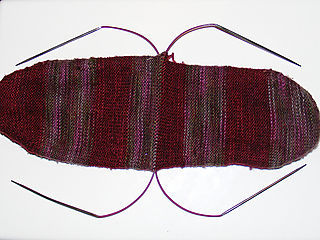 Progress continues apace with these, although they’re quite tiring to knit, what with small stitches and having to hold both strands under tension all the time. I love how they look on the wrong side, and I’m really impatient to see what the right sides look like, for which I’ll have to wait until they’re finished. I’m more than halfway to the heel, and I’m sewing in the ends from colour changing as I go, to avoid it getting too untidy, and to avoid the possibility of finishing the knitting and then being put off by all the ends and never finishing them. I don’t mind sewing in ends in small numbers, so this is working fine.

My MiL was very pleased with her scarf, I’m happy to report. And nowI’ve given her both the scarf, and the story of its making, I can postthe latter here.The image to the left is the cover of the ‘comic’ I made to accompany the scarf, and the rest of the comic can be found here (PDF, about 1MB). I feel a bit shame-faced about spending so much time indulging so many of my geekeries and getting Christmas-present-credit for it

The first two pictures are more woven scarves. The first is woven from the green-pink-brown handspun from a couple of posts down, and I sort of regret using the green stripes in the warp, because I think the colours would show up better without. I will give this to someone at some point, because the colours aren’t very me, but I haven’t decided who yet. The second is a last-minute Christmas gift for R, which I partly wove in front of him on Christmas Eve, figuring (correctly, it turns out) that he pays no attention to what I’m making unless I talk to him about it. There are stripes in the weft – plain dark grey Jaeger merino and black tweed YSL – but they’re much less obvious in the flesh than in the photo. Next up (pictures three and four) is the finally-finished Clessidra. I don’t think I’ll use the riverbed sockitecture again, because I don’t like how it fits me, but I love the socks and am going to wear them to a crafting date tomorrow

Picture five is R’s blue socks with a reknitted heel after he wore a massive hole in one of them. I think I’ve still got some of the blue, but I’m not sure where, and he didn’t mind them being mended in black. The last pic is my new sock project, double knit socks which I’m knitting wrong side out, so I don’t have to move the yarn backwards and forwards (near side is English-style purl, far side is continental-style knit, so one strand in each hand, which is fun). The downside of knitting them this way around is that I can’t read my knitting on the wrong side, so whether I’m increasing or not on any given row is a bit random but because I’m knitting them at the same time they’ll match anyway so it doesn’t matter, and I’m planning a short-row heel so there’s no other increases or decreases to keep track of. I wanted to use different yarn to make it easier to keep track of which stitch belongs to which sock, so these will end up non-matching stripes – once I’ve finished the toe I’ll break the yarn and swap them over, and keep swapping them at random intervals throughout (must remember to break yarn to do this, so I don’t end up knitting the two together).

I’ve also started spinning the red leaf fibre my parents gave me for my birthday. I took some photos of this a week or so ago, but the colours were off so I’d been holding off posting about it until I’d taken some better photos, which I now have! 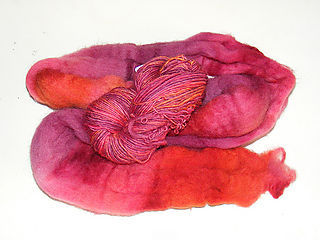 Red leaf yarn and fibre
I’m really happy with this – the colours are gorgeous, and it feels lovely and soft. It’s going to be woven with plain burgundy merino (still to be spun) into a wrap for me

And then, if there’s any fibre left, I have plans for rearranging the colours before spinning, and spinning yarn for a woven wall hanging for our living room (at R’s request, no less!) 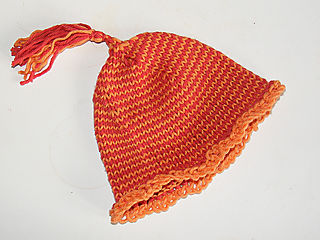 Since I had to guess the size of this, I’m really hoping it’s not too small for the intended recipient!

This is a hood-less version of Childhoodie from Knitty. I originally intended to knit it for the birth of my niece-in-law, but the first version of the sleeves didn’t work out, so I frogged and started reknitting, and lost motivation in the process. But it’s now finished in time for a Christmas gift, and I’m hoping the recipient hasn’t grown out of it before receiving it! Next up is a matching hat from the leftovers, which I will finish before working on any other crafting projects. Honest.

This (1) is the second lot of MoBair fibre from the Knitting and Stitching Show. This time instead of carding it, like I did the purple, I went through it decompressing and predrafting before spinning (2) – carding was rather a waste with the purple even though I like the resultant colour, but this would just card to muddy beige. Uncarded, it spun up into pretty shades of brown and green and pink (3 and 4), and as two-ply it does indeed average out to beige (5), but it’s lovely, and I almost wish it was a ‘me’ colour so I could make it into something I’d like to keep.