This is the first finished triskell cable sock(in the first picture, it’s next to the very beginnings of the second).There are all sorts of problems with the first sock that I’m stilldeciding what to do about with the second – should I fix them with thesecond, or should I have an identical pair? The biggest problem is thatthe cables on the back are a mirror image of the cables on the front,when they should have rotational symmetry instead; this affected myplan to have the ribs between cable panels join in the cabling – theystill do, as you can see on the side views, but I couldn’t have the tworibs themselves cross over, because that would have led to a cablecrossing error

I don’t dislike the effect, though, so maybe I’ll dothe same thing on the second sock. 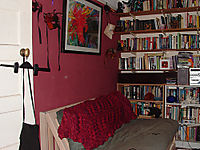 clapotis in library
This is my finished clapotis being modelledby the futon in the library. Not only have I finished and photographedthe clapotis, I’m also gradually reclaiming the library (whichfunctions as my study). Right of the photo is an armchair that’s piledhigh with stuff (mostly stuff that was piled on the broken previousfuton, I think), and in front of the armchair is anottoman-kinda-thing, which was previously covered with and surroundedby further piles of stuff, but most of those piles are now gone. And tostart off this tidying extravaganza, I sorted my knitting supplies andstash; the supplies are now in a little wooden cupboard next to mydesk, with my WIPs – each in their own ziplock bag, and the whole in acanvas bag – beside it. The stash, also in bags (categorised by colour)is in the pull-out drawer under the futon. If you don’t look tooclosely, you might think I was a tidy person!

I am wearing my finished clapotis

No pictures, because I haven’thad a chance to take any yet, and am now not at home, so probably noneuntil tomorrow, but I’m very pleased with it. And the friend I amvisiting has just complained that not only does she have to complimentme on nice clothes, but on making them as well. Hoorah! Thank you,Frax, for the impetus to have another go at making the clapotis.

So that swatchsock. It’s now looking more like asock than a swatch

The heel is turned, and I’m much happier withhow the yarn looks, now that the cable pattern is properly on the go.I’m also really happy with my cabling skills. I’ve made severalmistakes, of various kinds, with this sock, and I was reasonablyconfident at going back and redoing cables without having to tink/frogall the way. Hoorah!

The blue yarn you can see is a lifeline. I wanted cables on the heelflap, and I wanted them to match up with the instep side, so that thecables were aligned on the ankle, and I’m terrible at counting rows andworking out when to start doing things, so I used a lifeline in case Igot it wrong and had to rip back. I got it right, so I’ll get round toremoving the lifeline in a bit. The heel flap cables, incidentally,were hard. The way the rows worked out meant doing cablecrossings on the wrong side, which isn’t harder from ayarn-and-needle-management point of view, but means I have to activelythink about how each crossing will go, working it out from acombination of the chart and looking at my knitting (that’s another wayI’m happy with how my knitting is going: I’m getting much better atreading it when it’s doing complicated things). I did make a couple ofmistakes with the wrong-side crossings, but they’re not bad enough thatI could be bothered to frog them. Some problems with the ribbingbetween the cable panels, but it’s only glaring at the moment becausethere’s more mistake than actual rib 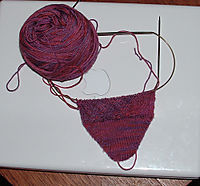 I’ve cast on for the swatchsock of theexperimental triskell cable socks, knit the toe and started thecabling, and the verdict so far is: the cable shows up fine. Troubleis, I’m not sure the yarn does: it’s gorgeous in the toe, but gets kindof lost in the cable. That might resolve itself as there’s more cable,and the yarn possibly gets more visible in the cable ribs, but in themeantime I am reminding myself that this is a swatch first, and a socksecond. If it doesn’t work as a swatch, I’m to frog it and go back tothe drawing board.

Maybe something else with larger areas of stocking stitch is what thisyarn needs, but I’m not knitting a plain sock, cos it’ll drive me mad.And I already have a simple pattern OTN, in the form of the clapotis,so if I’m to start making these socks, they have to be complex in someway. Maybe I’ll design a new cable pattern that’s designed to show offthe yarn a bit more…

I’m so glad I started this blog, btw. It’s great to have an archive ofwhat I’m working on, and an incentive to take photos and write aboutthe process. Should have done this ages ago!

(I wrote some of this yesterday, but Firefox crashed before I could post it, and I was too frustrated to write it all again.)

Clapotis-in-progress 1
This is where I’m up to with the clapotis. Well, actually, I’mfurther along than that, because I’ve done another pattern repeat or sosince I took the photo. I’m more than halfway through now (which isgood because I’m nearly halfway through my yarn!), and I still reallylike this. I’m starting to get bored with knitting it, though, which iswhy this post will go on to talk about plans and schemes that areforming in my mind

Still, the clapotis is good mindless TVknitting, so I don’t think I’ll abandon it, even while thinking aboutother things I could knit! 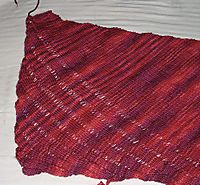 There’s a slight problem with a couple ofthe  stocking-stitch-stripes, where my fingers got confused with”kfb” and “ktbl”, and increased some stitches when they were supposedto be only twisting them, so a couple of the stripes are ratherbulbous, which you can see in the picture to the right – counting downfrom the top-right, the second and third stocking-stitch-stripes areswollen near the top. Probably no one but me (and now you!) will evernotice, though.

The plots and schemes I mentioned earlier are to do with the sock yarnthat arrived with the clapotis yarn – blue and green Cascade SassyStripes, and Lorna’s Laces Shepherd Sock in “Valentine” (still muchpinker and tamer in real life, but in my head it’s still the colour ofblood oozing from a heart. Which probably makes me really gross, butnever mind). I swatched the Cascade last night; I don’t have the needlesize the Jaywalker pattern calls for, just the one below and the oneabove, but even with the smaller one, my gauge is way off, and thenumber of cast-on stitches would produce an enormous tube, so I thinkI’ll have to rejig the pattern. Fortunately, it comes in nice simplerepeats, and the length of each zig-zag is also adjustable, so itshould be really straightforward once I’ve re-swatched properly. WhichI will probably put off, because I hate swatching in the round – eitheryou have to cast on millions of stitches to make a tube wide enough tomeasure properly, or you leave loose yarn around the back, but then thethree-or-four stitches on the edges are too loose to be any good atall, and it’s really fiddly to manage. Sadly, my purl tension isdifferent from my knit tension, so I do have to do circular swatches. 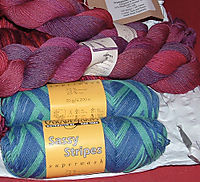 The Lorna’s Laces is more troublesome. I knewwhen I bought the Cascade that it would be for Jaywalkers; all I knewabout the Lorna’s Laces is that it would be socks for me. I hadn’treally got any idea what kind of socks. Now I have a plan to test out -more swatching! – to see if it works with the variegated yarn. Thecolours are fairly similar, so I think it might well work. The plan is(surprise, surprise!) cables. Frax suggested using my triskell cable onsocks, and since the jumper of doom is destined for frogging, I stillwant something knitted with the thing, having designed it. So I’m goingto swatch that, and see how it works. And because a whole sock will betwo cable repeats around (give or take a few ribs), I might as wellguess a number of stitches and actually cast on for a toe-up sock andsee if it works. (Has to be toe-up because the pattern is chartedbottom-up, and I’m too lazy to rechart it.) I’m going to use the toe-upheel-flap method from Baudelaire, because I like it, and because itgives me a good number of stitches to be able to start the back cablepanel on the heel flap itself, which I think would be rather cool.

My fingertips and nails are ever-so-slightly more pink than usual. TheFyberspates is leaking dye

Guess I’ll have to wash it when it’sfinished to stop it leaking onto any hypothetical light-colouredclothes I might wear it with.

clapotis progress shot 1
I have no patience. Immediately afterwriting the last post, I went off in search of needles to cast on. Theneedles I’m using are 5.5mm Addis because (a) they’re new, and I wantedto use them, (b) they might make my clapotis a little larger anddrapier, but mostly (let’s be honest) (c) I was too impatient to spendany longer looking for my 5mm needles

However, 44 rows in I’vemeasured my gauge, just out of curiosity, and it’s precisely on the 19stitches per 4 inches that the pattern calls for. The Fyberspates knits up beautifully. It is a bit stripy, but not toomuch for my taste (I even think I’d like it in some non-clapotis form),and it’s interesting watching how the stripes are changing as the workgets wider. It’s very soft indeed, and has that slight sheen that silkhas. It’s supposed to be DK, but judging by the way it’s knitting up on5.5mm needles, I’d call it a bit more like aran. It’s single ply, with only a light twist, so it’s quite splitty, butmostly I’m not finding it a problem (perhaps because I’m payingattention to it, in the interests of admiring its beauty). I’m noweager to get to the drop stitch rows, so I can admire them, too

Someone told me the other day that knitting doesn’t count as a vice.Needless to say, said someone has never had the joy of opening a parcelfrom Get Knitted containing approximately £70 worth of gorgeous, gorgeous yarn.

new yarn
I’m not sure the colours are coming out quite right in thispicture (not helped by being photographed on my bright red sofa), butthen none of the colours are quite what I was expecting from the GetKnitted site either. Not that this matters – they’re all stillperfectly good colours

I’ve just wound the first skein of Fyberspates’ Scrumptious into aball, and it’s the softest thing ever. I’m itching to go and getneedles to cast on for the clapotis immediately – it’s going to belovely. The Lorna’s Laces is much more purpley-pink in real life, and lessbloody-muscle, but that’s probably for the best. The colour variationsare quite subdued for a variegated, which I like, although I’m stillnot sure which pattern I’ll use it on. Finally, the Cascade Sassy Stripes isn’t the colour I originally chose(which they only had one skein of), and it’s a bit brighter thananticipated, but its intended recipient will probably still like it.And she assures me that “zig-zag stripes” (ie Jaywalker) will beacceptable