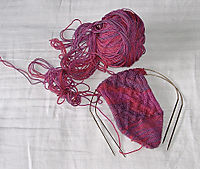 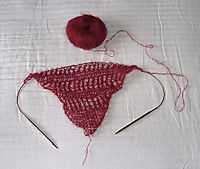 Beginning Wisp-ish
Something about Wispcalled to me. Maybe it was just that I had the Kidsilk Haze in my stashanyway, but here is the beginnings of my bias-knit Wisp. The number ofrows in each band isn’t the same as in the pattern, because I wasn’tlooking at the pattern when I started, and because unless I get roundto getting some pointy lace needles, my tolerance for knitting KSH laceis low, so my lace rounds are quite narrow. It looks really pretty,though

Ahem. I seem to have cast on for something like Wisp.I’m probably knitting it a bit wider, so it’s more like a wrap than ascarf, and I’m knitting it on the bias, because I like that better forknitted wraps, and I’m doing the basic theory of alternating stripes ofgarter stitch with yo, k2tog lace, rather than precisely following thepattern, but it’s basically Wisp. Mmm, Kidsilk Haze

Although I dowish I had pointier needles – the Addis are really a bit too blunt.

I get quite excited about new issues of Knitty. There’s not oftensomething that leaps out and wants me to knit it (only Clessidra of thelast few issues, I think), but I love seeing what people are designing,and feeding those ideas into things that I might design and/or knit.This issue there’s one pattern that… well, I probably won’t knit itas is, but I’ll knit something like it, inspired by it, and that’s Wisp. I like that sort of scarf/wrap/shawl thing, and I have some KSH in my stash, so I’ll be adding it to my Ravelry queue. The other pattern that I like the idea of is Askew.I don’t think I’ll knit that, either – knitted vest tops don’t reallyexcite me, and I’m sure that Silk Garden would be too hot for thesummer – but I may well make a jumper inspired by it. (No, the jumperof doom hasn’t taught me that I don’t like jumpers.)

Having said knitted vest tops don’t excite me, I do really like both Zinzin and Coachella,but since I wouldn’t wear either (the perennial bra problem), there’sno point about even thinking of knitting them. And I’d die of boredomwith that much stocking stitch.

The lion dishcloth, Grr, is lovely, but I don’t really get dishcloths, and I can’t see why I’d want to knit one even if I did (although if I did knit one, it would be a lion one).

And of the socks, Coupling is pretty, but doesn’t look so different from Elfine, or any of various other lace socks out there; Sweetpea is nice but not interesting, and the yarn obscures the pattern; I really like the patterning on Breeze,but not the anklet shape, so I’d have to adjust it if I made it; andalthough the lace pattern is called “bluebird of friendliness”, Vogon isn’t really all that interesting. 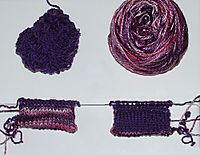 Contrast hem
This is the contrast hem swatch(Photoshopped to show both sides in one picture), and the two types ofyarn used in it. The solid dark purple is the merino DK reclaimed fromthe jumper of doom, the variegated pinks-and-purples is Curious Yarns’Gleaming DK (please spare a moment to mourn the apparent-passing ofCurious Yarns). It’s provisional cast on, nine rows of silk in stocking stitch, onepurl row in silk (turning row), nine rows of merino, then on the tenthrow I put the stitches from the provisional cast on on a separateneedle and knit them up with the merino (am relieved to note that thesilk doesn’t show through on the right side at this point). At the bottom of the right-side (on the right, hah!) of the swatch, youcan just about see the turning row; I think it looks nice, and I lovehidden details (I came up with the idea while wearing my purple-ishlinen dress, which has a band of pretty braid inside the hem, invisiblemost of the time but making me happy every time I wear it anyway).

cardigan-sketches
The picture to the left, which my partnersays looks like a castle, is actually the schematic for the body of anAnn Budd raglan cardigan, with grid squares of the appropriate size fordesigning Celtic knotwork, which is what the various scribbles are.This is just brainstorming patterns at this stage, seeing what I likeand what works well together. I’ve probably decided on the versiondrawn into the left front on the picture, leaving most of the frontplain stocking stitch, and the back will probably be some more complexpanels, separated by narrow panels of simple plait or twist cables, orpossibly moss stitch or something. Still thinking about it. I’m considering a contrast internal hem, using some lovely purplevariegated silk that’s the same weight as the solid purple merino thatwill be the body; leaving one row of the variegated visible at the turnlooks good in the swatch. If the sleeves end up slightly bell, the silkwill show inside the cuffs, but even if it doesn’t, it’s the kind ofdesign detail I like. And I’ve been trying to work out what to do withthe silk for ages

Last night, I frogged the jumper of doom. It is now a bagfull of ratherkinky (oo-er) balls, waiting to become something else. When I was donefrogging, I started flipping through books and magazines and makingsketches to try and work out what that something else will be; a cabledcardigan seems most likely, predictably enough

Design sketches,notes and brainstorming will be forthcoming…