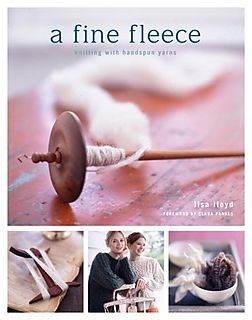 A Fine Fleece: Knitting with Handspun Yarns
Lisa Lloyd
Frax linked me to Knotions, and although I haven’t properly engaged with the site yet, the first thing I spotted was a review for a fine fleece. Without even reading the review in detail, it was clear I wanted this book – even a superficial glance reveals that it’s all cables and handspun. I ordered it immediately

It does not disappoint. It’s gorgeous – fantastic photography, high quality production values (coloured binding tape is always a favourite), and beautiful page layouts. Well-written, too. As a design geek, a cable knitter and a spinner, this book is clearly aimed squarely at me. Lots of the jumper patterns are drop-shoulder, which means I won’t knit them as-is because I don’t like that shape, but since there are several beautiful ones with set-in sleeves, and plenty of non-jumper patterns, and since I rarely knit patterns verbatim anyway, this is only a minor niggle really. I’m considering adapting at least one of the drop-shoulder patterns into a set-in sleeve with the same cable panel. The book’s big schtick is that each pattern is illustrated in both handspun and commercial yarn, showing various possibilities, and there’s a lot of interesting discussion about the attributes of different breeds of sheep, and other technical spinning details, but in a way that’s accessible (and useful) to the non-spinner as well as the spinner. 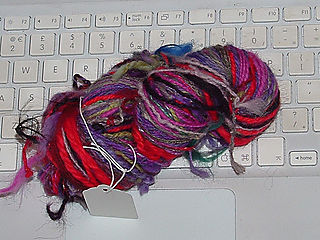 Oddball 2
I’ve spent part of today gathering my spinning samples and leftovers, plying the singles, and tying the whole lot together into one big skein. This is the second oddball I’ve made and although it’s still predominantly purple, there’s a lot more red and a lot less blue in this one than the first. I think, like my shop-bought leftover yarn, this will be a lengthwise-knit garter stitch scarf or shawl on big needles. But I shall resist the urge to cast on for it until I’ve cast off the shop-bought one! 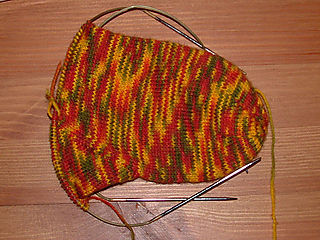 Autumn coriolis 1
I’m just back from the Reading Festival, and – inspired by Kauket – decided to take some sock knitting with me. A quick peruse of my sock stash and queue turned up nothing planned that’s simple enough that I don’t need a pattern, but then I remembered that friend-R, who bought the autumn-coloured Opal handpaint in my stash (for socks for herself), expressed a desire to have Coriolis socks after seeing mine. Having just knit baby Coriolis, I was pretty sure that I could knit the whole thing from memory, as long as I had access to the revelant master numbers, so I began the toe, knit enough to take gauge measurements, and then wrote the master numbers on a business card which I packed with the yarn. I didn’t do much knitting while I was there – I didn’t take the knitting into the arena (although I might next year), and much of the time I was at the campsite either I was not in a knitting frame of mind or it was too dark. But on the first day we were there, before the music started, and yesterday after we got home, I did enough to make a serious dent in the first sock

Bellatrix FO pics! They look more twisted than they feel, which is ideal. What’s not ideal is the obvious colour difference despite matching dye lots

Still, perfect matchingness isn’t high on my list of priorities, and I love them. And there’s enough yarn leftover to make another pair of something else 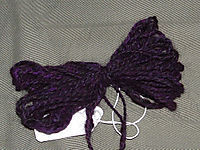 I’m not sure how well this picture has come out, because the colour details are quite subtle even ‘in the flesh’, but this is my latest beginning-planning spinning project. It’s about two-thirds natural black alpaca hand carded with about a third purple merino, and then rolled sideways off the card so the fibres are roughly aligned, then spun and plied. In person this is really quite lovely, with black bits and purple bits and blacky-purple bits, and somewhere around DK weight. I have about 400g of the alpaca and 250g of the merino, so together that should be enough for an actual thing, possibly a gothy lacy shawl. 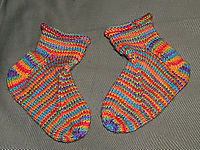 Baby rainbow coriolis
Baby socks: quickest thing to knit ever. Started on Tuesday evening, finished this morning. And the Lorna’s Laces rainbow which looks so lovely in the skein and so horrible knitted up actually works in a garment this tiny. Especially on the heel flaps – it makes an actual rainbow! These are coriolis master pattern, not practice sock, because the practice socks are on stupidly-large needles, but using the master meant I had to guess/estimate/research baby foot sizes. I hope these err on the side of being slightly too large rather than slightly too small, but having no experience of baby feet I’m not sure. Also afoot: plans to knit ChildHood, although probably without the hood, just because the pattern says the hood knits up large and benefits from being tried on, and there’s no way that’s practical. I think I’ll do this with red as the main colour and orange as the contrast. This is, of course, utterly unlike anything I’d knit for myself, but that’s the point of having small relatives, no? (She will be a niece, by the way; I’m knitting bright colours because I hate the tyranny of blue-for-boys-and-pink-for-girls, not because we don’t know.) 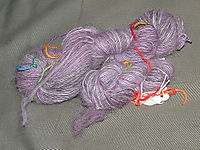 Lilac alpaca for MiL, batches zero and one

And I now have a picture of the yarn I’m spinning for my mother in law. That’s batch zero (the small one, before I started carding it, rather bumpy and uneven) and batch one, carded, mostly smooth and nice. It’s not actually as much fun to spin as I’d hoped, partly because it’s really dirty (much more than it looks) – my hands feel all grubby quite quickly, and unless I cover my clothes, so do they. But I’m scared to wash the fibre unspun in case I felt it, and because drying it after dying took ages and got in the way, so I don’t want to repeat the experience. So I’m steeling myself to spin it dirty, and I’ll wash it before plying.

The current plan for what I’ll knit this into is a garter stitch seafoam scarf or shawl, although I haven’t yet swatched to confirm I like the stitch, but I had such fun knitting Bellatrix (which is basically seafoam in stocking stitch), and it gives a nice open texture (also, more area for less yarn!) that it seems a good plan.

No photos of this yet, but I’ve also been spinning the alpaca I bought in Hay and dyed a variegated pinky-lilacy-grey. I started off spinning it as-is, but this turned out to be a pain, so I’ve now started carding little bits at a time (so as to avoid mixing the colours too much) and spinning the carded fibre instead, which is much easier. It’s quite fine, and is going to be two-ply (it’ll probably be somewhere around fingering-sport weight) and is currently intended to be a Christmas gift for my MiL, who told my partner that she was expecting ‘something spectacular’ from us this year after he told her about my spinning and knitting. This isn’t actually a demand, so I don’t mind going along with it, and the alpaca is in any case too pastelly for me, but I think she’ll like it. Depending on how much yarn I produce, I’m probably thinking of a lace scarf or mini-shawl (there’s 200g of fibre), although I haven’t thought about patterns yet other than to decide I’m going to design it myself rather than follow someone else’s pattern – I rather like the idea of telling the MiL that I dyed, carded and spun the fibre then designed and knitted the garment, all by hand. I’m such a show off

(In other family gift news, it’s only just dawned on me that I should knit baby things for my BiL and his wife, who are planning to produce a neice or nephew for us in October. Note to self: research baby knits on Ravelry.)

The first picture is the non-gusset side of the first sock, the second is the gusset side – since this is Cat Bordhi’s sidestream sockitecture, the two sides are very different. There’s a yarn over section near the beginning of the gusset, from before I decided to leave it in plain stocking stitch, so I’m intending to go back and work the loose yarn along the row to remove it. It looks fine as is, anyway, so it’s not a big deal. I’ve been thinking about how Ravelry’s ‘percentage complete’ box works with socks. When I finished the first one, I triumphantly changed the project to ‘50% complete’, and now, even though I’m sure the toe doesn’t actually constitute 10% of a sock (and therefore 5% of the total project), I’ve just changed its status to 55%, to signify that I’ve begun the second. I only permit myself to reach 25% and 75% once I’ve completely turned the heel, even though that’s probably more like two-thirds than half of a sock. This is also complicated by my uncertainty about whether I’m estimating percentage of stitches or percentage of time – the toe and the heel both take much longer per stitch than the foot or the leg do; with the whirlpool toe this is particularly obvious, since each plain knit round takes much less time than the corresponding increase round, especially at the beginning. If I’d had a stopwatch to hand as I was thinking these thoughts while knitting the toe just now, I would probably have started timing rounds and calculating seconds per stitch

I’ve also been enjoying my ‘progress report routine’. When I reach a stage in a project that I feel is worth documenting (which is often as much to do with how I feel about a project as reaching milestones in it), I take photos, download them from the camera, import into iPhoto for editing, then export to the desktop. From there I drag them into my Flickr uploader, title, describe and tag them, then upload to Flickr and put into appropriate sets. Next I add to the new photos to the Ravelry project, change the project’s percentage complete, and if I want to show the photos or have something to say about the project, I blog them here. I started this blog to provide a structure for me to keep track of projects and write about them, and the combination of the blog and Ravelry means I’m able to think much more critically (in the neutral-not-negative sense) about my knitting and my spinning, and apply my innate geekiness to them. This makes me happy

Having a wool gathering with White_Hart and Dyddgu earlier, I finished the heel on Bellatrix, and now with an evening’s TV viewing behind me, I’ve knit a couple of inches of leg as well (photos below were taken a couple of hours ago) – this goes surprisingly fast

I love the eye of partridge heel (even though it doesn’t really suit the yarn/pattern perfectly), and I like how the sidestream sockitecture makes the foot part look slightly twisted (it doesn’t feel twisted, just looks it). The pattern is lovely – I really like how it messes with the colour changes, and leaves big fat blobs of colour in the middle of the stripes.

Very happy with these, and hoping to finish the first sock this week, although the wool gathering has made me feel all spinny again, so I’ll be doing some of that too