I don’t yet want to spin in front of the TV – it requires too much attention, and it’s still fun in its own right, so it seems like a waste – so just because I’ve been spinning, doesn’t mean I haven’t been knitting, too. We’ve been watching a lot of spooks, during which I’ve mostly been knitting the clapotis that’s in the top picture. It’s boring, so it’s good TV knitting, and the gaps between the exciting dropping of stitches aren’t too long, so there’s something to look forward to all the time. The second picture is the scrap scarf I mentioned below. It’s been ongoing for ages, and probably will be for ages more, but it’s shaping up nicely, and it means I only have to throw away leftover pieces that are too short to have two knots tied in them, which is good because I hate throwing away tiny bits of pretty (in the same vein, I’m keeping all my tiny wispy bits of spinning leftovers in a bowl next to my desk, with the thought of trying to spin them all together when I’m proficient enough to try it). I have also knit a row or so of the goth space invaders (black and purple bmp), but I’m just not enjoying it. I need to persevere so I get the hang of the stranding, which will make it more fun, but at the moment it’s just annoying and fiddly, and I’m channeling all of my perseverance and determination into trying to finish off my various academic assignments by the end of the semester, so the socks will have to wait.

These pictures are of what I think I shall call my first successful spinning project – it’s turned out roughly as I planned, and it looks lovely

(The tape measure shows centimetres for scale.) This is the end result of the purple spinning from my last post – the big skein is about 90m of two-ply, and the smaller is about 26m of singles. The plied yarn alternates solid lilac, solid purple, and a candy-cane effect of both. The thickness of the singles and the twist in the ply varies quite a lot, but I still love it. I think it’s probably going to be a hat, because it’s about the right quantity, and because I need a hat that’s a bit more sensible than my current silly pointy hat. The singles are what was left after I’d filled the spindle with plied yarn – it would take no more, and since I’d plied enough to make a hat, I thought I’d leave the remaining singles. I might use them to trim something, or they might go into the ongoing scrap scarf (which I’ve actually knit some of this week, after being inspired to take it up again by someone on the LJ brit_knits community). 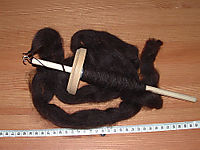 This is my current spinning project. Mostly I’m just trying to spin as thin and as evenly as possible; I’ll decide how to ply it (and what with) and what to knit with it when it’s finished and I can see how well I’ve succeeded. I’m more-or-less getting the hang of drafting now; I started off pulling sections as wide as I wanted from the tops, and hardly drafting at all, which meant it was slow because I had to make lots of joins. Now, I’m starting with a much thicker piece of fibre and thinning it down just before it meets the twist. As far as I can tell from my reading on the subject, this is what I’m supposed to be doing

It’s getting easier, and producing better results, all the time, which is always a nice thing in a new hobby.

For my birthday I received two drop spindles and some more fibre to add to the stuff I bought at Ally Pally, and over the last few days I’ve started to teach myself to spin.

Attempt number 1 (Jo’s spindle – the one on the left)
I pulled a random width of fibre from one of the undyed black tops, and spun it into a very variable, quite slubby yarn, which I’ve now knitted part of to prove I could. The yarn and the swatch are on the right in the picture.

Attempt number 2 (Jo’s spindle)
With a better idea now about drafting fibre, I separated one of the lilac tops into even-ish pieces and spun the whole lot, producing about 60m (50g) of only moderately variable singles – no more variable than, say, Manos. This might be a hat; I’d originally thought about plying it, but it’s just about a useable quantity as singles, and wouldn’t be if it was plied. This is the lilac ball in the picture.

Attempt number 3 (MiL’s spindle – the one on the right)
I spun two short and thin sections of the undyed black, and then plied them to create the tiniest skein ever – about 5m. No plans to do anything with such a small quantity, but I’m pleased with how the plying turned out. This is the tiny skein on the left.

Attempt number 5 (MiL’s spindle)
(This is out of order because this is finished, and therefore in the above photo – it’s the one in the middle at the bottom.) I spun one short and thin section of the black to test out Navajoplying (which is just like making a crochet chain with really bigloops, and then spinning it). The effect is lovely, and it’s easier tohandle than two separate plies in some ways, but when the instructionssay it works better with singles that have relaxed into their twist abit they’re not lying! In quite a few places my single has twisteditself out of the ply and wrapped around itself a bit before returningto the ply.

I was planning to do the same with two other shades of purple and ply the two together for a variegated purple overall effect, but now I’m thinking about Navajo plying or about plying it with grey instead in order to spread the purple – my favourite – out a bit. I suppose what I’ll do is wait and see how many metres I get out of the current colour combination and then decide based on that – Navajo plying is three-ply, so will eat a lot of singles.