My first ever weaving project, in progress (made from Knitwitches sock yarn): 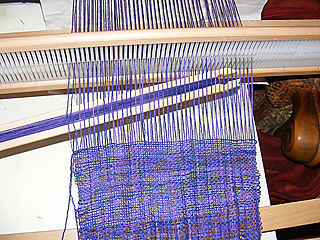 And my second, completed, made from handspun alpaca: 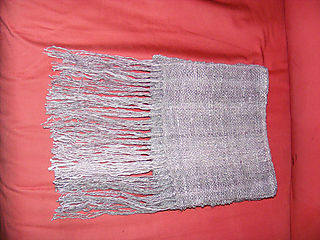 The second is my MiL’s Christmas present, and I’m working on a step-by-step description of how I made it, which will accompany the gift, and which I’ll post here when it’s finished. 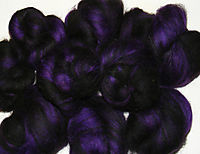 This is the next batch of black alpaca carded with purple merino. More than half of the fibre is carded now, and it’s going much quicker with the drum carder than it did with hand carders

I’ve actually spun one batch of this, but I don’t think I’ve taken any photos. It’s about 5m/g, and will either stay as singles or end as two-ply, depending on what I decide to do with it. It’s probably going to be another woven wrap, but at the moment everything looks like a weaving project to me, since the loom is spread across the library floor in pieces having been varnished at the weekend. I’m resisting the urge to assemble it for as long as possible, because I can’t start using it for another week and a bit, so barriers are good

The grey-pink alpaca for my MiL’s Christmas present is finally all spun and plied. The first picture is a closeup of two balls of singles ready for plying, and it’s really just another excuse to show off the macro capabilities of my new camera! The second picture is of the finished yarn, about 500m of two-ply. I spent some time the other day swatching from my sample of this yarn, and I didn’t come up with anything I liked, so this is starting to look like a weaving project as well. Of course, weaving it also  means the finished item (a scarf) will be larger, since weaving uses less yarn than knitting, so this is solidifying into a plan.

So, it’s not my birthday for another couple of weeks, but today my parents paid their birthday visit, so I opened my present from them under the guise of allowing them to see it (since I ordered and paid for it and they, like me, had only seen a photo of the finished thing).

I ordered this fibre as a custom job from Freyalynn, with this photo as inspiration. I may have mentioned before that I’m planning to weave this with some plain-dyed burgundy merino, to make an autumn-coloured wrap. I’m only resisting starting to spin this by reminding myself that I need to learn about weaving to ensure I spin the right yarn for the project. Until I start using the loom, and understand something about what kind of yarn works best for weaving in general and my loom in particular, I will save this fibre and resist its siren call. But it’s incredibly beautiful, and I have to keep getting it out to stroke it 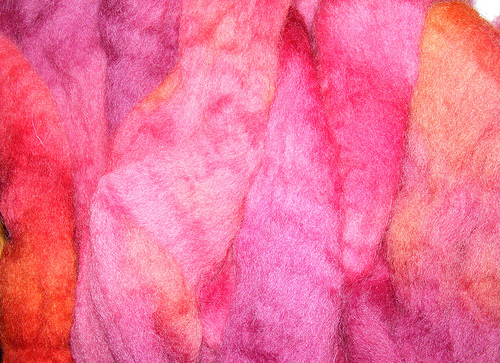 I’ve been reading up on double knitting, because it features in some of my currently-planned projects, and I’ve had a revelation: if you want your two pieces to be separate, you don’t have to be constantly moving yarn back and forth if you knit stocking stitch right sides together – then you’re purling the front piece English-style and knitting the back piece continental; one yarn per hand, and each on the correct side of the knitting at all times. And it works both in the round and flat. Hoorah! 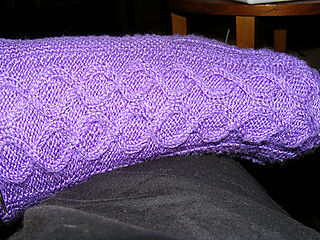 Clessidra back of leg 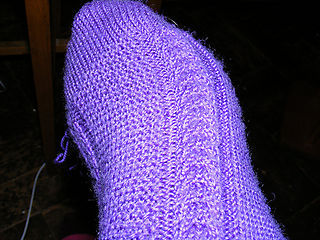 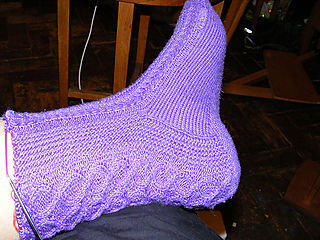 Clessidra side view
Three quarters of the way through sock number two (sock number one languishes at halfway, because I started the new one for some knitting I didn’t need to pay attention to).

More spinning closeups! This is the fibre and spindling-in-progress for the purple ball on the ball winder in the previous post. There’s still some variegation visible, although nothing like as much as in the pre-carding fibre. But my main excitement on these pics is that even in the ordinary macro mode (as opposed to super macro), the first photo was taken a couple of centimetres away from the subject, and every individual fibre is clearly visible 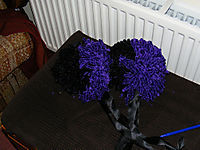 Pom poms
Neither knitting nor spinning, but I frogged an ill-advised early project, rescued some Sirdar ‘Wow’ (which has now coated my house, my friend’s car, and another friend’s flat with fluff), and made two largeish pom-poms for a goth cheerleader costume.

My old camera died, so I’m way behind in taking photos of things, but today I bought a new one, which I chose on its ability to take closeups. So here’s the last week or so’s crafting…

Spinning! The alpaca (first two photos) isn’t new spinning, but I took the photos to test the closeups – the second is without flash, because super macro doesn’t work with forced flash, but it still shows that the picture is clear even this close up. The third picture is the plied result of the shetland-merino-silk-mohair mix, and the fourth is to be a gift for a friend. It’s the hand-painted purple wool I bought at the Knitting and Stitching show, but it was so matted it wouldn’t spin easily without carding it first, so it’s much less variegated as yarn than it was when I bought it. I’ve got two more lots of fibre from the same supplier, but carding really would mess up the colours in those, so I’ll have to carefully pre-draft before spinning it.

Knitting! We bought teapots on holiday in Cumbria, and now I’ve made a teacosy from the three-ply wisteria yarn that matches the navajo ply in my dissertation socks. It took me a day, and the top is Cat Bordhi’s whirlpool toe! And I’m still knitting along on Clessidra – over halfway through both socks now.