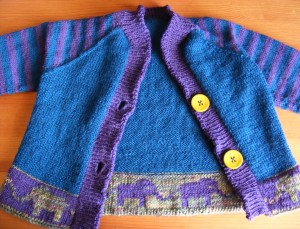 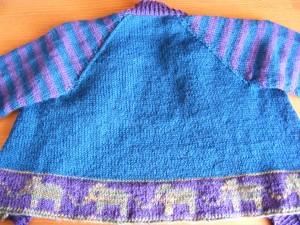 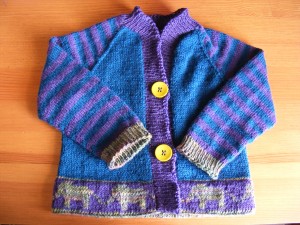 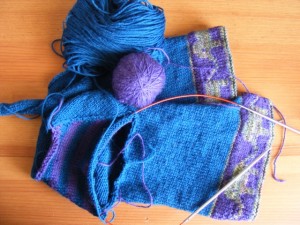 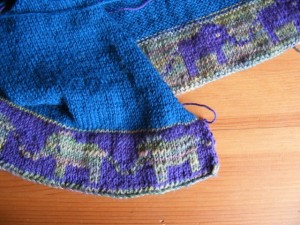 Via Flickr:
Unblocked, and modified for a narrower scarf with a longer straight section. Love the non-matching ends.

Yarn: Zen Garden Serenity Silk Single, bought in Ithaca when I was at a conference there.
Pattern: feministy.com/triptych-shawl/ 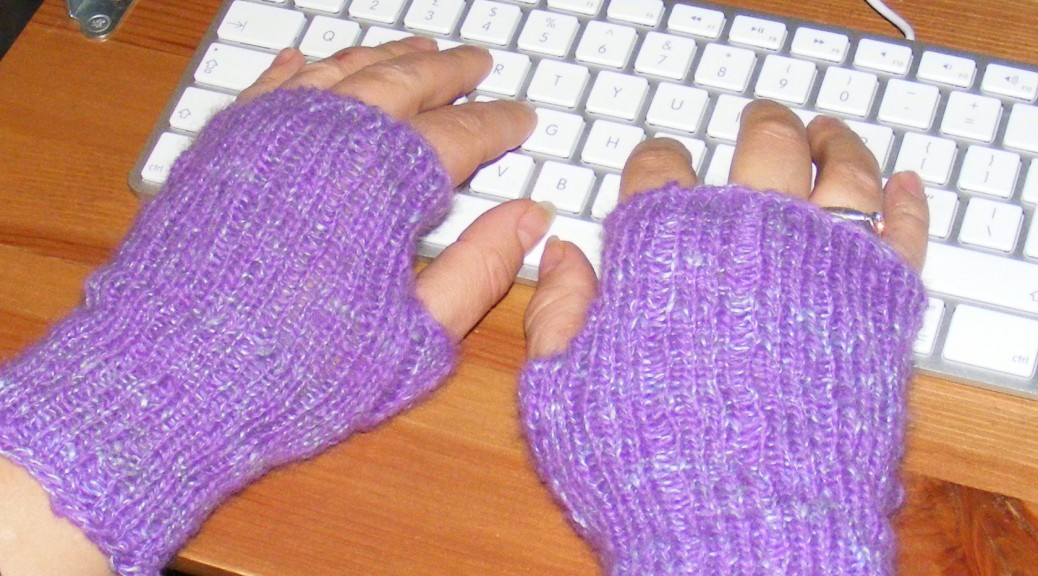 My officemate Lydia complained that her hands were cold, typing in our sometimes-freezing office, so I offered to knit her some mittens. These are the result, knit from some handspun that I called ‘Silk Cut (with merino)’ because it reminds me of the colours of Silk Cut cigarette packets, and is made from one strand of merino plied with one of silk. These are the four faces of my first suffragette cuff. Naturally, I prefer the purple side

There are some mistakes in the white side, although I’ve checked and they’re mistakes in the knitting, not in the chart, so at some point soon I’ll publish the both-sides-right-way chart to go with the simple one. (It’s very exciting publishing a pattern on Ravelry and then watching people adding it to favourites and queue!)

I’m also planning some adjustments to the chart to suit a wider range of stitch counts – it should be fairly easy to narrow the pattern in several places. And I’m thinking about serifs…

This is mostly going to be a photo post rather than a words post, because I’m so far behind

First, Christmas presents for other people…

A scarf for my dad, which seemed to take ages and got very, very boring. But it was worth it because I found out after I’d started that he’d asked my mum for a hat and scarf, and she hadn’t been able to find a scarf to fit his exacting requirements, but had bought him a navy hat. And he loves it A hat with ears for my friend V’s baby. Ears to please mummy, goth black to pacify daddy And four identical pairs of cable mittens, for three of my best friends and me, with a deeply symbolic four-strand cable design. And a finished birthday-and-Christmas present to myself (because apparently you can never have too many pairs of fingerless mittens), the modified reading mitts, which I’ve been wearing all the time: These aren’t technically a Christmas present, but I knit them over Christmas after I realised Ralph had no gloves, and I had some spare black yarn left over from the hat-with-ears. (They’re loosely inspired by pictures of Dashing, but not knit to that pattern.) In fibrey gifts, my parents gave me some spinning wheel bobbins and a rather steam-punky bobbin winder, which I haven’t photographed yet, and my in-laws gave me this lovely fibre: I’m now making a third attempt to knit this lovely purple merino into a jumper. The picture is actually a lie, because something went wrong with my gauge calculations and I had to frog, but the second go is going much better, and is nearly at the armholes (bottom-up) at which point I’m going to have to make a decision about what kind of sleeves to have. It’s deliberately plain (no cables on the second version, though there were on the first), so I can knit without looking at it, and therefore read academic papers at the same time, and doesn’t mind being put down in the middle of a row (and the harmony needles are grippy enough that I don’t need to slide them through) so I can stop to make a note whenever I need to. This means I’m getting through it quite quickly And finally, the first FO of 2010! Felted slippers, to an improvised design with stripy double-knit soles, and felted to exactly the right dimensions so they fit perfectly! Over a month ago, I was half-heartedly whining about having only one thing on the needles, and the need to go and cast on for something else. Now I once again only have one thing on the needles (the same thing – selbu modern, which I’ve hardly touched in the meantime), but in between I have knit lots of things. My course kindly provides the required reading in A4-photocopies, which are conveniently flat, making it easy to knit and read at the same time as long as I choose my knitting carefully, and I’ve been doing a lot of reading since I last blogged. Sadly, I haven’t yet worked out how to blog and read at the same time.

Immediately after hitting ‘publish post’ on my last post, I did indeed go and start preparing to start something else – I wound some handspun yarn (peacock) into a ball and started swatching. I’d been thinking for a while that this wanted to be a scarf in a peacock-tail lace pattern, and now it is! (Although it still needs blocking…) While knitting the scarf, I decided that I really needed a new hat. This is my own design, although I misjudged the width of the ribbing – it’s this wide so I can fold back the hem, but I don’t like how it looks folded, so I wear it unfolded and covering most of my face

I’m planning to make another, with less ribbing, and then perhaps publish the pattern (heh, I’m always saying that and never do. Eventually!) The hat got christened on a very rainy Reclaim the Night march, and kept my head warm and toasty and dry throughout, so I am declaring it a success! When I said I only had one thing on the needles, I was using a rather strict definition of the term, because one of the off-the-needles things is a single mitten, the pair for which I’m going to cast on next. This is a modified version of Susie’s reading mitts, worked upside down, with a different gauge and thumb gusset, and with the hem edges knit into the fabric rather than sewed down later. The lace pattern, which was drew me to the mitts in the first place, is unaltered I spun the yarn for this over my birthday weekend, having given myself the weekend off all study-work and work-work (I’m still behind on both kinds of work because of this, but it’s an article of faith that I don’t work on my birthday). The yarn is rather more brown than I usually like, but I think the colours suit the pattern, and I’m enjoying how the colour shifts in different kinds of light, looking sometimes more purple, sometimes more brown, and sometimes more grey. This is chain-plyed to keep the colour changes intact, but I’ve got half of the fibre still unspun, so I think I’ll two- or three-ply that to see the difference in finished colours. I’m getting quite interested in achieving different colour effects in finished yarn from the same fibre, and I’ve got some ideas about other ways to play with this, which I’ll blog about if I get round to doing it before I lose interest in the idea!

If this doesn’t sound like quite enough knitting in a month to be called ‘lots’, it’s because about half of my November knitting has been on gifts for people who might conceivably read this blog, so the rest will have to stay unblogged until after Christmas! This is Ella blocking, all flat! I’ve worn her a couple of times, and she’s nice and warm, and I’m pleased I paid attention to alternating the more- and less-variegated skeins in knitting her. This is the Zauberball I mentioned in my last post, in the process of becoming the dragon’s breath scarf (so named because this is an adaptation of the flickering flames pattern, and red). I’m a lot further on now than in this picture – I just haven’t taken any photos for ages.

I’ve finally finished both Lucas’s Tomten and the red cardigan, both of which were waiting for fastenings, and I’d failed to find the green toggles and reddish-purple ribbon, respectively, I wanted, so in the end I plied some yarn (orange for tomten and the silk mix edging yarn for the red cardigan) against itself twice to make cord ties. The double plying means the cord is stable, and it’s four times thicker than the working yarn, which is a good thickness.

I’ve now got three knitting projects on the go, and they’re all actually in progress: yesterday I worked on all three of them, depending on how much my eyes were free to look at them:

This is what Ella looks like at the moment (photo taken without flash to better capture the texture): It’s crazily three-dimensional, with squarish bobbles that pop up or down, and I keep having to stretch it out to reassure myself that it will probably block flat: I’m only a few rows away from the point where the back splits into the two fronts, which is good going, especially since I’ve been knitting most of this in the same timeframe as Wisteria.

This is the current state of the Ella: It’s lots of fun to knit, I’ve got the pattern memorised, and it’s progressing quickly. However, today was cold and rainy, and I was not dressed warmly enough, so I spent the day shivering and fantasising about getting home and putting on a warm snuggly jumper. The only problem is that I don’t own such a jumper. Enter Wisteria… The slightly fuzzy nature of the yarn means the camera doesn’t focus where the eye does, so these cables are actually visible in the flesh. I’m a bit worried the collar is too wide, but I expect the cables (crosses on every round!) will pull it in more as it goes along, so I’m not panicking yet. And it’s beautiful, and the yarn is lovely and soft, and I’m smitten.