I got out my spinning wheel again for the first time in *cough*years*cough, and made this rather uneven yarn! Think I might do some more spinning, though, and hope to produce better next time. 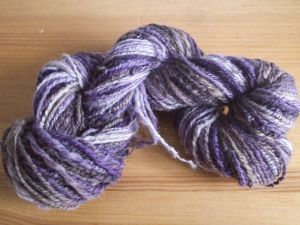 And then I went to Yarndale with Frax, and restrained myself from buying fibre, because I’ve already got loads. But we saw sheep:

And I did buy a fairly large quantity of yarn (for a jumper, a cardigan, a pair of gloves, and a load of hexagons), some beautiful buttons, and some needle tips for my Chiaogoos.

Just before Yarndale, I fell in love with the Under the Party Tree mitts, and bought the pattern and cast on within about two hours of first seeing it. Lots of knitting time at the weekend, and I’m nearing the end of the first one:

And I’m already planning for my next project, using some of the Yarndale haul. Look! A swatch! I’ve even blocked it, and it’s sitting drying next to me as I type…

It turns out that there were a couple of errors in the stitch-count calculations for Wisteria that I was talking about in my last post. It further turns out that I shortened the body length on the fly (the stated length might have nearly reached my knees!), and that when I double-checked the weight of fibre, it was even more generous than I had thought. The upshot of this is rather than needing to buy more fibre to finish, I’ve actually got about 110g leftover – enough for a pair of socks, or a hat, or a laceweight scarf. The leftovers might end up being my first attempt at dyeing fibre, but in the meantime I present my finished Wisteria! Apart from the body length, I made two other mods: my first ever short row bust shaping, which has worked well, and a split double-faced hem in place of the hem cables. I wasn’t keen on a horizontal band of cables around the widest part of me, and I like split hems for fit, and I’m very pleased with how it’s worked. I came up with about four different ways of working the hem, swatched a couple, and decided on this…

I put the back stitches on a spare needle, and worked across the front, knitting into the front and back of each stitch, doubling the stitch count. Then I worked back across the wrong side, knitting each stitch that was created on the previous row, and slipping the ‘original’ stitches with the yarn in front. Then back to the right side, I knit the ‘original’ stitches, and slipped the ‘new’ ones with the yarn in front. Lather, rinse, repeat.

The effect is like double knitting, takes a bit longer, but is less fiddly because it only needs one end of yarn at a time. It creates sealed sides as well, which gives it bonus points over just knitting the hem flat and folding it. I used a standard cast off, except with k2togs for each pair of stitches instead of plain knit, thus attaching the front and the back to each other and making a pretty chain of stitches along the bottom.

The other I’m-so-pleased-with-myself idea in the hem is that the yarn is made from the same singles as the main yarn, but in two-ply instead of three, so the hem is barely any thicker than the main body of the jumper, while not looking and different.

I’m wearing the finished item as I type, and loving it Wisteria is progressing fast enough that I’m going to have to go and spin some more yarn for it in order to keep on knitting!

It’s thick and heavy and warm and soft, and I’m loving it. In fact, it’s terribly difficult to work out whether what I’d prefer to do at any given moment is knit it or admire it

I spent this weekend with Frax and J, dyeing lots and lots of yarn, knitting (and spinning for me), and watching a hefty chunk of Battlestar Galactica.

This is what I came home with: That’s overdyed yak yarn (previously salmon pink, cream and grey) at the front, a whole load of previously-undyed Cumbrian wool yarn at the middle and the back (it’s semi-solid rather than solid, but more consistent in colour in real life than it looks in the photo), and some handspun undyed grey wool in the middle-back (this is going to be Wisteria). It feels as if I suddenly have lots of new yarn, and I’ve even started knitting the violet wool: There’s a lot more of it now than when I took the photo, but this is Ella from Knitty, and it’s working out rather nicely

Having knit and blogged* my swatch, and held it up against my face to see if the colour suits me, I’ve made my fastest decision ever: this fibre will be Wisteria, in its beautiful undyed state.

I’ve even bought the pattern (and, cough, Sylvi too, ahem). I’ve been meaning to buy something from Twist for ages, if only because I heartily approve of them, so feel as if I ought to support them by actually giving them money. It’s not that I don’t like free patterns – Knitty is fabulous, and I don’t think Twist could exist without Knitty paving the way for it – but designers should be able to be paid a decent amount for their work, and it makes me very happy that the knitting community can produce and support a magazine like Twist. Especially after my less-than-happy experience with Vogue.

So, Wisteria here I come! I think the mojo might be back

*How can I know what I think until I say write it?

When I got home this evening, I opened one of the bags of fibre, stroked it for a bit, and then pulled off a small piece for sampling

This is spindle-spun three ply (I’ve never made a true – as opposed to navajo – three ply on a spindle before, and it’s a pain. I resorted to breaking off three pieces of singles and winding them onto bobbins in the end), knit up on 5mm needles to exactly the gauge of 4.5 stitches per inch that Wisteria calls for (The contrast-coloured yarn at the edges is random sock yarn I used in order to eke out every last drop of the tiny amount of sample yarn.) The stitch definition is actually better than it looks in the photo, the fabric is soft and drapy and slightly fuzzy, and I love the way the different shades of grey blend with each other. I might lightly dye it for a reddish or purplish tint, but I might just spin and knit with it as-is because the natural colour is gorgeous. This is the first before-work postal delivery we’ve had in ages, and it’s a whole box of fibery goodness just for me

Sadly, I now have to go to work and leave it sitting here all unloved, but when I get back there might be a teensy bit of sampling to do.

(Fibrecrafts‘ delivery times are not to be sneezed at – I only ordered this on Sunday night.) I have knit all of my spinning oddments into a decent-sized (ie its ‘wingspan’ is a bit longer than mine) triangular shawl, and then crocheted an edging onto it, and added crochet ties. It’s the craziest garment ever, a hotch-potch of colours and textures, and I doubt I’ll ever wear it outside the house, but I love it anyway, and am enjoying identifying all the little bits of handspun yarn.

I’ve also made some purchases, one within the rules of the self-inflicted yarn and fibre diet, and one breaking them. The permitted purchase is a bunch of nice-but-cheap superwash wool yarn in three different colours, which will be a Tomten hoodie for the baby my oldest friend is currently working on. Depending how much yarn is left after that, there will be a matching hat, and possibly even mittens to go with (in which case I’ll come up with some way of attaching the mittens to the jacket). Yes, I know a hooded jacket doesn’t need a matching hat, but I’m having the urge to knit the baby jester hat.

It’s a permitted purchase because I don’t have any superwash in stash apart from sock yarn, and baby gifts need to be washable! Plus it comes from the gift budget, rather than the yarn one (or would if I planned my budgets that precisely

The not-permitted purchase is 1kg of undyed grey wool fibre, with a couple of discounts applied, which worked out to be really quite cheap. I’m toying with the idea of spinning a jumpers-worth, and then following someone else’s patten, in the hope of actually achieving a jumper that I like. And the pattern might be the beautiful Wisteria (noooo, not influenced by sockpr0n at all, why do you ask?

I can’t resist a bit of a mod, though – I think I’ll leave off the cables around the hem, because I suspect they look best on people much thinner than I am.

Depending on what kind of grey it is when it arrives, I might dye some or all of this, possibly carding the dyed with the undyed for a heathered yarn. Of course, thinking about all this has reminded me that I haven’t finished carding the black alpaca and purple merino blend, and have spun only a very little of it, so now I’m thinking about that again, as well, and trying to decide once and for all what it will be, and therefore how to spin the rest of it.

This in turn reminds me of the red leaf wrap, still sitting mostly-unwoven on the loom, and calling to me every time I go into the library and see it sitting there. I have a crafting date this weekend, so I’ll probably take the loom or the wheel with me and weave or spin while the others knit.

Talking of spinning: the weekend just gone, I met my first real in-the-wild spinner (Sadie and B don’t count, since I pimped the spinning shiny at them), and I’m deeply envious of her since her father owns a sheep farm and is the neighbourhood shearer, so she gets her pick of fibre! Finally, a new project! This is another baby hat, two coloured intarsia in the round, and intended to have zig-zaggy stripes and cat ears (for which I might need to ask around for a little bit of pink sock yarn, since I don’t have any, and I think ears look cuter with pink inside – anyone have any spare?). The zig-zagging, shown in closeup in the photo, means the join between colours moves one stitch each row, which is helping with the holes intarsia would otherwise risk.

So on the whole I’m tentatively declaring the mojo returned, which is a relief

On Saturday I was suddenly struck with sea-green inspiration… (More images and more detail available under my Kraken tag on Flickr.)